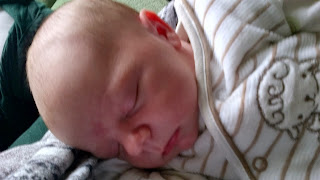 Looking back, obviously I should have called sooner in order to manage a calmer labour environment. But- chances are that the story would have been the same.
My daughter was 9lb 7oz. A good weight, but hard to deliver, especially in back to back presentation. I would have had to have stitches for sure, which in my area means hospital transfer.
I've chosen to look at the experience positively. My main reason for homebirth was for my sons benefit, and he was with us up until the hospital, back with us within less than two hours. The staff were fantastic on labour ward. They didn't blink about allowing him to be with us. They made him tea and toast and worked unbelievably hard to discharge us as soon as possibly.
After all the drama of delivery, my baby girl proved content and easy to feed. Her apgar was better than my sons, and we were home at 4 am not even  11 hours after labour started. Waking up later that morning with both babies next to me really helped heal the pain of a complicated labour.
At first it hurt to say I had another hospital birth. Two months on though I can see that where  homebirth had gone wrong , my daughters birth had gone right. It was the gentlest and most natural experience for our family.