Is it possible to parent two under two "gently" 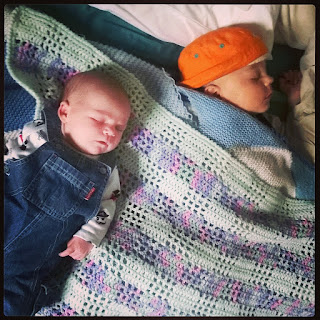 Since babies arrival I have been struggling to parent my toddler gently. Obviously two under two, a business, an allotment and a degree to handle was never going to be be easy, but I hadn't quote prepared my self mentally for how much it would stretch me. I also didn't want to take a break from anything.
However having two babies, there is always a compromise, especially when you want to be a gentle parent and want to keep busy.

For example I'd wanted to avoid daily screen exposure (tv, tablet, phones etc) for frog until he was two. By the third trimester I was dead on my feet by 4pm so tv became a more present part of our lives.
Supermarkets are also I compromise I've had to make. Sometimes I've not been able to get into town before the independents shut
Our Waldorf inspired daily rhythm has also been shelved. I am a little disappointed. But am trying to focus on the positives and view all of these slackenings as part of the adjustment process to life with two.
On the positive- I managed to continue nursing my toddler through pregnancy- and we are now two months into tandem nursing-wahoo!

I actually really love feeding my babies together. Our tandem nursing and nap in the early weeks kept me sane, and definitely have is all a nice reboot in the afternoon.

Talking of sleep - we are still cosleeping and bedsharing. Baby has settled well into our family sleep routine. I will write a part about cosleeping with two soon.

Baby wearing has been a lifesaver too. Daddy frog has even started wearing babies. We are never far from one of our three mao-tais- which are easily adjusted for each baby.

discipline has probably been the hardest part of being an attachment parenting mum of two. I'm working on my ability to facilitate the toddlers need for RIE play whilst responding promptly to my baby.
I've kinda accepted that for a while I need to embrace the mess his self initiated activities create rather than police the mess during. At least until I can fall into a new daily rhythm.

But the biggest lesson of parenting two gently has been slow down. Do less and enjoy the moment.